It was mid February and the weather was still a little up and down. We have been waiting for a large enough dump to cover the wind packed base and a thick enough soft layer to settle on. What we got in reality were sprinkles of snow less than 10cm at a time. The only place worthwhile venturing to during this period was Asahidake or Tokachi, as high as possible. As an extra challenge the freezing level increased to 500m above sea level one day, and the saddest thing happened – it rained. It wasn’t until we drove up to 650m before the rain turned into snow.

For the next days I have the fun loving duo Vince (ski) and Geo (snowboard). Aside from the obvious difference in mode of snow transport, they had a different preference with level of chillness and arrival time. All in all it just meant we had a nice relaxed approach to Asahidake without having to depart so early in the morning. 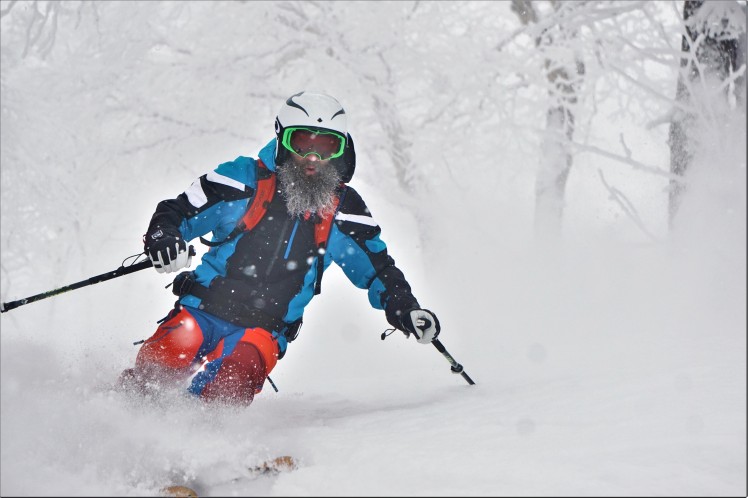 Asahidake was true to form. It always outperform the forecast with regards to snow fall. It was back to its normal self with low visibility but a constant top up of snow throughout the day. On our first day, we lapped up as much easy pow as possible in the main face of the mountain, and tested Geo’s energy and tenacity in the flatter deeper area of the mountain. There was a little bit of walking for Geo and a little bit of waiting for the skiers. There were plenty of people in Asahidake as it had the best condition around the area. The queue was down pass the bottom of the stairs and at times we would have to wait for the next cable car. It was nice for the operators drop the waiting time from 20min to 10min to try and get us all up to the top as quickly as possible. 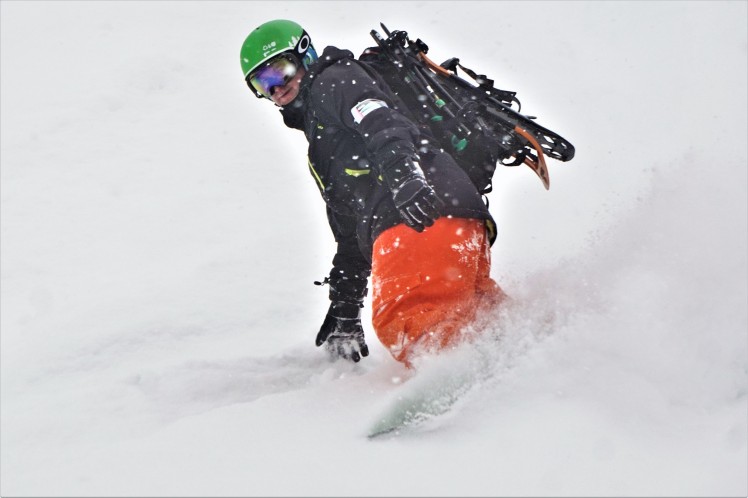 Andy took the guys out to the swamp one of the days to give me a day off to learn a new area to broaden our scope. The went into the swamp area which I was learning to like more this season. So once I was back with the group, we ventured to the other side for some longer runs which came with some longer return hikes. It was an enjoyable few days watching Vince adjusting his French Alps piste style to powder skiing. It was a master class and a testament that if you were mindful with your ski technique, you could adjust and ski anything.

We took a break from Asahidake and went over to ski Tokachi on day two. The guys were keen to go for a hike and try some alpine touring. There was no better place to do it then the protected forest under Furanodake. The entrance to the trail was spectacular and exciting with a river crossing. It was a nice walk up the mountain climbing around 400 vertical meters. Even in the middle of winter this climb would warm you up rather quickly, and the wind above the tree line would cool you down immediately when you get there. It was a new experience for Vince and Geo. Our conversation took an expected turn towards RER as we approached the end of our climb.

We skied through some nice boot deep powder to just above the steep wall of the gully. Unfortunately we committed the cardinal sin of stopping just a little too far below a comfortable place to transition and climb. This margin could often be as little as 2 meters and you would have to struggle to side step up crumbly snow before making trail with a reasonable climb angle. We had plenty of sweat (Vince) and laughter (Geo) as we began our struggle. Geo was kind enough to help, although through his goodwill he managed to get a taste of our efforts.

We had a well deserved lunch break mid mountain in the silent forest pop up restaurant which we dug out. I had chargrill squid, onigiri and a slice of mille crepe, a proper culinary exchange. On our return hike we took a slight detour as we tried to avoid a pile up situation, and enjoyed an extra practice session of transition just before our final descent back to the river crossing.

I have had the most chilled out few days with late starts with the guys. We traded cheesy jokes like ‘Why don’t Italians smile in photographs?’ and ‘What kind of cheese do you use to tempt a bear out of a tree?’ Vince was not completely convinced on the RER of ski touring, and Geo was an absolute trooper on snow shoes. It was safe to say we made friends even on a rainy day.