Kamui Ski Link is under 30 minutes drive from Asahikawa the second biggest city in Hokkaido. It packs plenty of retro-chic as you step into the 80s when you arrive. The chair lifts give you plenty of time to faff with your gear on the way up, and they are all romantic two seaters. The main cable car is of classic vintage although they have fitted snowboard racks wide enough for fat skis. Being so close to the city it can be popular on the weekend, but never more than a small queue. Weekdays are a good call as you will be sharing the slopes with a few baby boomers and the occasional school groups which always stick to the learner slopes.

The pistes offers some steep race quality runs which are sometimes prepped for race practise. But you are unlikely to be here for the that. The posters dotted around the resort do not try to hide the fact that Kamui is all about the trees, in fact, Kamui is the home of the ‘V de Tree-omphe’. If you are planning to venture further afield, there is an arm band you can obtain from the ticket office. The normal out of bounds rules and implications apply. It is worthwhile to be self-sufficient with your own gear on your adventure.

It often feels colder in Kamui. Nothing a giant portion of tonkatsu and rice called ‘King of Kamui’ or a hot bowl of ramen can’t remedy. The canteen area is separated into two, one of which appears school canteen like. Hand your meal ticket from the machine to the chefs grab a beer from the vending machine while you wait. There is a famous ramen shop called Nobu, but at first sight it reads NOB set aside on its own away from the main building. It’s nice but not spectacular, and the toilet there is a bit pong. The café at the top is a great place for a short defrost break, or for an indoor picnic. The view is brilliant on a clear day. The toilets on the other hand is also very uncharacteristically pongy.

There are a few obvious terrain obstacles to look out for in the back and minimum navigation issues in the front. The lay of the land offers a favourable aspect to ski some wind loaded areas, although giant glide cracks are a persistent hazard in Kamui. The trees are well spaced and therefore well skied. If your turn radius can be tightened up, there are plenty of tighter tree runs which are often neglected. It is always a fun challenge to try and find an untouched boot high powder run after lunch. Nothing beats those lucky afternoons when you find the goods and drop into a zebra patterned slope with the waning sun casting shadows through the trees. Kamui is probably a one dayer, especially if you are on a mission to sample other ski areas. So if you want to maximise your fun efficiency, a day tour with Alpine Backcountry Guides is a no brainer. Check out a sample of our trips in January 2016 below. 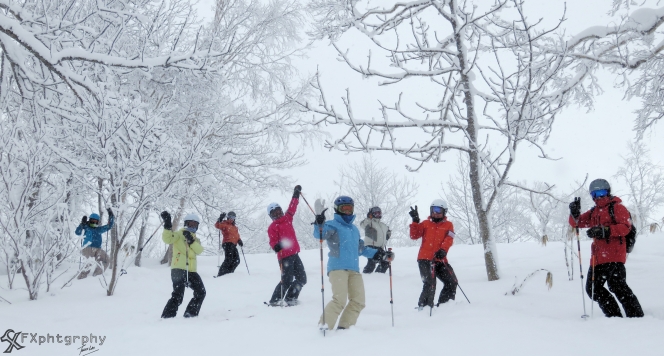