This story began the day before en route to Nishidake…

We had 3 good skiers on board and we were testing their new AT gear, and fitness. We managed to climb 300m vertical to the ridge just below Nishidake without any issues. Weather conditions spanned between wispy clouds and some sun to light snow and windy. I thought that was actually a perfect spectrum to have experienced on this ski tour. Nothing encouraged speedy transition more than the wind and cold. It definitely taught the lesson of keeping a good hold of your gear before they fly off in the wind. 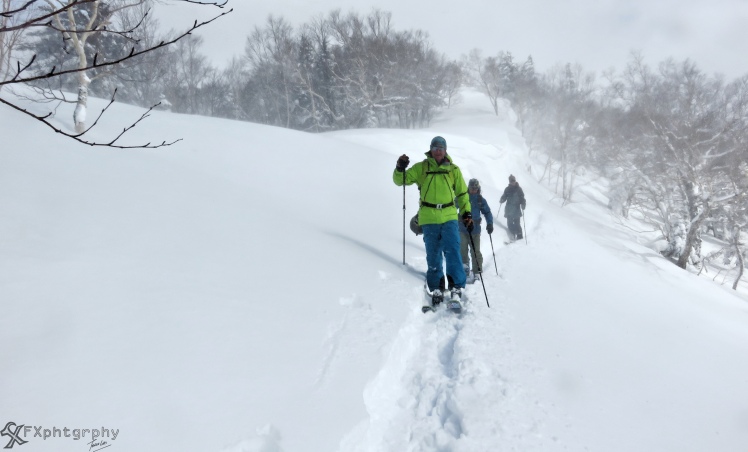 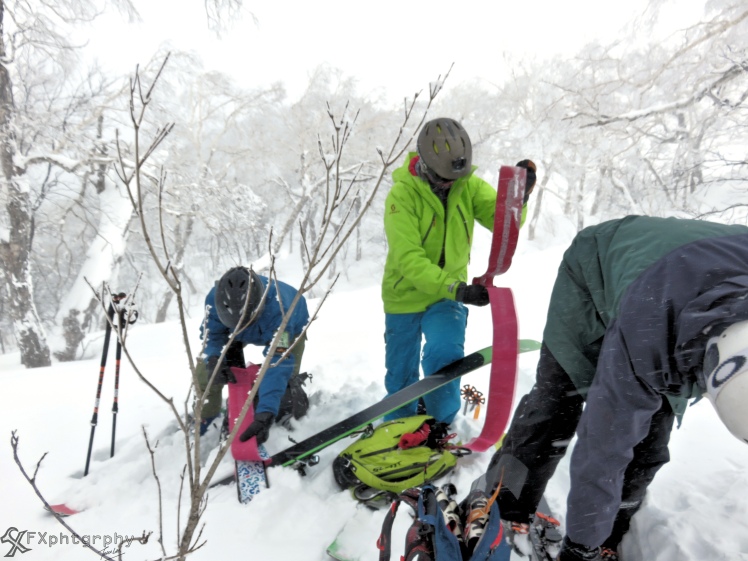 Whilst I have lost a lot of kudos for installing foot bed warmers, I must say on that windy ridge with toasty toes was worth all the ‘peanut butter and jealous sandwiches’ everyone else were having. My fingers on the other hand (both hands for that matter), were frozen. Nonetheless, even I would refuse to have heated gloves, that’s just ‘too wussy’! Besides there was plenty of time to shake it out while I wait for the crew to pack up their skins 😉

Training day was successful and we were primed for the main event the following day! A backcountry day in Asahidake approved by John. The forecast was low wind, good vis and possible clear skies, so we hit the unmarked trail as soon as we got to the top of the gondola. Whilst the forecast eventually came true, we started our ascend in almost white out condition and the wind was picking up on the way to the ‘Hot Rock’. This was going to be a ‘worthiness test’ I thought. The path to paradise was not going to be easy. Those who deserve it would be guided by… compass, altimeter and topo map… and angels and magic of course if you like. 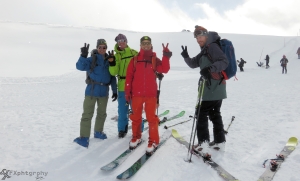 I was indeed surprised by the massive changes in the landscape since my last visit at the end of January. Wind scouring and the warm/wet period had removed so much snow from the area pertaining to the flat plane that it was now transformed into two deep gullies with a narrow ice ridge perpendicular to the prevailing wind direction. I set our target to west and 1550m elevation and skinned towards it. We had some visibility every now and then, but the landscape did not look familiar. Trusting the compass and altimeter we approached our perceived drop zone to find relatively soft snow at our feet.

Boot penetration was up to knee. That was a great sign. The wind was picking up. That was not such a good sign. It was time to make a decision of whether we would head to our targeted G4 area or should we be conservative and head towards G2&3 so to preserve our option to bail out. No matter, first thing first. We need to get into ski mode. Helmets on, protect the skins and goggles, keep ‘warm’ and do not let anything fly off. And, maybe a sip of hot chocolate whilst we waited for the last person to finish his transition.

And so the angels arrived and magic occurred. As quick as a blink, the white out lifted, the clouds dispersed, the blue sky appeared, and the wind packed up and left. A glorious bluebird day and a giant white snow rabbit greeted (ran away from) us, leaving a trail of giant bunny foot prints over a vast expanse of untracked soft pow and 250m of steep vertical. We could see the village below us and we were dead on point at the drop zone of G2&3. All we had to do was to scoot over to G4 and we were ripe for some face shot, slo mo, pow heaven, blah blah blah. I could go on, but, ‘50 seconds of pure delight’ was enough to describe it. This area has single handedly changed my mind about Asahidake. I have only love for you!

Tip of the day was to close your mouth whilst skiing otherwise you will be eating snow. The plan of the day was to lay down a skin track and hot lap G4. But then, on the way up we found G5 – steeper but maybe marginally shorter. Oh well, we would just have to ski that as well. By 2:45pm we were spent and it was time to evac. Although it would have been nice to be completely solitary, we did share the mountain with 6 people today. To our delight, they have laid down an exit track for us. We almost had some interaction with a local snowboarder, but we were not sure if he was friendly or not. I guess it was understandable to be protective of a place like this. Earning the turns has never been more poignant, and I hope he respected our efforts to ski that face after inspecting our ski and skin tracks before boarding pass us. 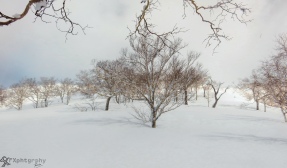 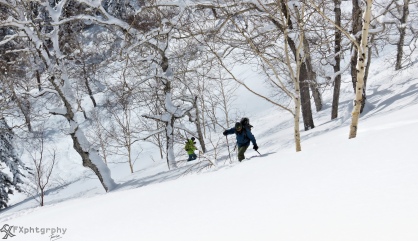 I had an inclining that this was going to be the last ride of the season in my mind, and this would be an amazing end mentally. It didn’t disappoint, and whatever else I skied from here would be a bonus. I was rather proud to have introduced Asahidake to the crew in a similar light to how John had shown me a few years ago. The guys would have to come back again to ski the well-trodden paths to see what everyone was talking about, the amazing Asahidake.